It may appear that XYLITOL has disappeared into obscurity, given the five months that have elapsed since her last public performance in collaboration with LIBBE MATZ GANG but you couldn't be more wrong.
Pending a cassette release this autumn, XYLITOL has been working alongside DJ SARMA on a series of electro-pop tunes inspired by the Yugoslav new wave scene. This will be available from the usual channels.
Aside from XYLITOL MUSIC, as DJ BUNNYHAUSEN she has been co-presenting a weekly radio show playing underground, lost and reforgotten tunes from Central and Eastern Europe on the Margate based radio station The Neon Hospice. You can tune in to Slav to the Rhythm every Sunday at 20:00 hours (BST)
Posted by Xylitol at 05:11 1 comment:

Keeping up my prolific workload so as to maintain my reputation as the hardest gigging minimal wave artist in the business, I will be performing at 6pm on the Ace of Wands stage at Profound Sound in Folkestone this Sunday the 4th Feb. It's free, at the Quarterhouse on Tontine Street.
Posted by Xylitol at 13:43 No comments:

I am playing live at the next Electronik Netwerk event at Vinyl Deptford on November 5th.

The venue is a fab record / coffee shop / bar run by the lovely Jenny and Rocket Ron of Dragon Discs / Ambient Soho fame.

Xylitol live at Spirit of Gravity


bookings, etc: kate_bunnyhausen@gmail.com innit
Posted by Xylitol at 14:01 No comments:

XylitOmmm show this afternoon (11th June)  at the Green Door Store, Brighton. Part of the Free Splitting The Atom all dayer.

I have an IKEA bag full of Casiotones set to space disco with which to battle Ommm's mighty Teisco synth and verbal dexterity.

All new and exclusive! 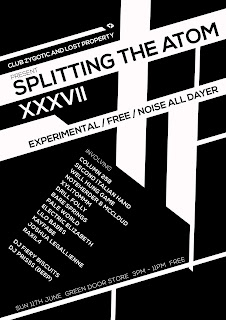 The Xylitol Side of my split tape with Gloria Gloucestershire

can now be downloaded or streamed from my Bandcamp page

Upon which I sometimes put stuff what I'm working on.