So, for the next few weeks I'll be making, recording, broadcasting and generally 'intervening' in the everyday life of LV21 a 50 year old Light Vessel sitting in the Medway. I'll be publishing a words-and-sounds blog to record the experience. Links coming soon! All very exciting!

Meanwhile, I still have copies of the record
Posted by Xylitol at 13:14 No comments:

Hot from the pressing plant, I have some copies of the 'KUNST IST TOT' 7" EP. Four tracks from the pre-MySpace era selected by Peter Strickland (Berberian Sound Studio, Katalin Varga), remastered by Colin Potter (Nurse With Wound, ICR, etc) with artwork by Steven Stapleton. Copies available from here http://xylitol.bandcamp.com/ or I'll accept trades or barters for whatever goodies you might tempt me with: email me jim[at]lumin[dot]org

Thanks!
Posted by Xylitol at 03:53 No comments:

The eagerly awaited Xylitol "Kunst Ist Tot" 7" has been delayed due to a pressing fault, as seems to be a regular occurrence, but should be out in a month or so. Watch this space.

Meanwhile, Xylitol co-conspirators Libertatia Overseas Trading have just released a CD of quite scary music from Finland which I cannot help but recommend:

I'll be playing records as sole representative of the extraordinary krautrock DJ collective Kosmische at this rather fantastic looking festival of experimental arts, culture, stick whittling, etc. in Oxfordshire next weekend. I'm not sure but I might controversially diverge from the Krautrock canon if the mood seems right, let's see how it goes.

The Sweet Taste... of Xylitol

Like the slightly befuddled dad that I'm slowly coming to realise I actually am I've managed to set up a Bandcamp page for Xylitol, from which you can download the lost 2nd Xylitol album from 2007 'Error Bursts In Transmission' (it's funny how six years can seem like a lifetime ago, he says whimsically.)

You can also download an exclusive Xylitol sampler 'The Sweet Taste of Xylitol' collecting together some barely-heard-before material from the earliest years, the years of frenetic overproduction and some more recent efforts which may yet be reworked into something new in the future.

It's all here, and while I'm still overcome with the irrational desire to share the fruits of my labour with the world for nothing you can download them for free. Donations are welcome, of course.

Xylitol "Kunst Ist Tot" will be a four track 7" single on esteemed filmmaker (Berberian Sound Studio / Katalin Varga) and Sonic Caterer Peter Strickland's Peripheral Conserve record label. Four tracks culled from the Xylitol archives from the over-active years of 2004 - 2007 back when I still produced new work. My rather sketchy and lo-fi efforts have been beautifully remastered by Colin Potter and come housed in some quite astonishing artwork by Babs Santini aka Nurse With Wound's Steven Stapleton (see below...)

Will be released in August 2013 as a 7" with download card, and also as just a download for those without access to a record player.
Posted by Xylitol at 05:55 No comments: 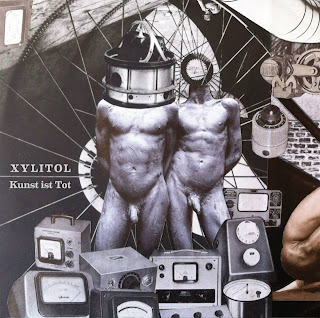 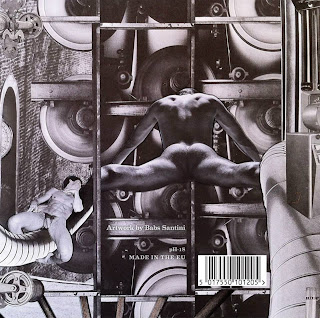 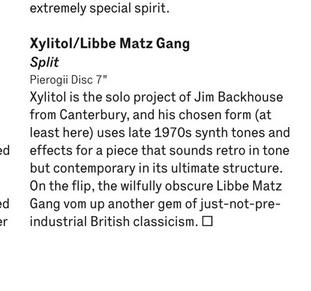 The Other Same Day Retread


Here's a remix of Xylitol track 'The Other Same Day Retread' by Drift Of Signifieds, which was originally brutally chopped to about 30 seconds on volume 2 of the Xylitol remix/not-a-remix album. Now you can enjoy it in its full, spectral glory

A Review and A Bulletin.

In this month's Record Collector: 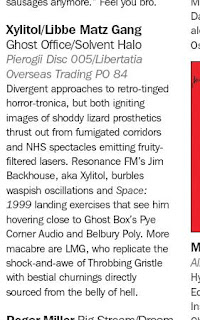 ex-Resonance FM, strictly speaking, but no matter. Thanks to Spencer Grady.

For those interested, some new Xylitol material will be coming out later this year, on vinyl. I'm thinking about putting some old Xylitol material (tracks from Functionary, Error Bursts and some v early no-fi NDW pastiche business) on Bandcamp for people to download if anyone's interested. I'm also in the process of putting together a third 'proper' Xylitol album which - I promise - won't exceed the usual 20 minute mark.
Posted by Xylitol at 11:24 No comments: